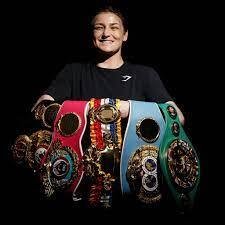 Katie Taylor is an Irish professional boxer and former footballer. She is a two-weight world champion and the current undisputed lightweight champion, having held the WBA title since 2017, the IBF title since 2018 and the WBC, WBO and Ring Magazine titles since 2019.  Following her victory as undisputed Lightweight Champion, she became one of only seven boxers in history, female or male, to hold all four major world titles in boxing simultaneously.

Her current record as a professional boxer is 18 fights and 18 wins, 6 by way of KO.  Katie was also the headline fight in 2020 in a historic night of three female world title fights.

Katie is currently partnered with Gymshark within the activewear space.  Please contact us direct with any enquiries.